The Instrumentation department is responsible for the technical study and production of scientific instruments or particle detectors proposed by the IP2I scientific groups. Its multidisciplinary team enables it to take into account the constraints linked to the various fields of engineering, and to interact, if necessary, with the Institute’s services specialising in these disciplines: mechanics, electronics, computing, data acquisition, cryogenics, etc.

The next stage is the manufacture of a prototype and the test benches necessary for its validation. Several iterations are sometimes necessary before reaching the final solution. The final solution is often a compromise between technical and financial feasibility and scientific constraints. Finally, the prototype is mass-produced and integrated on the site of the experiment.

Projects are carried out within the framework of the quality assurance system set up in the Institute. The project follow-up documents and the manufacturing and control procedures established at all stages of the cycle enable the Instrumentation department to efficiently transfer mass production to industry or specialized services.

The Instrumentation department is involved in the development of several scientific instruments for different IP2I research teams. The instruments developed are intended for experiments or scientific collaborations in various fields, such as particle physics, astrophysics, nuclear physics, particle-matter interactions, and whose applications can go beyond the field of physics: thus, some instruments find an application in the fields of biology, geology or medicine.

The Instrumentation department is involved in the following projects:

For the CMS experiment upgrade work (CERN, LHC), the department has been involved since 2008 in an R&D project for the design of new trajectograph endcaps. We have proposed a system of composite sandwich “Dees” (half-wheels) on which the silicon detector modules will be mounted directly. These modules will be cooled by thin tubes integrated inside the Dees, and powered by a two-phase CO2 cooling system. Each of the two plugs of the new trajectograph will consist of a total of 20 Dees. This proposal was accepted by the CMS collaboration and published in the Technical Design Report of the experiment in 2017. 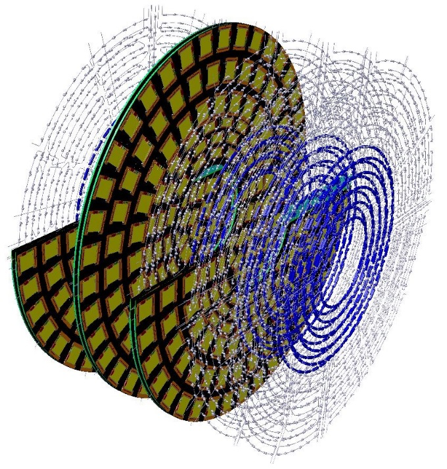 View of the 5 double disks of a whole TEDD, with their cooling circuits and silicon detectors (yellow) – © N. Lumb

The department designed and implemented a two-phase CO2 test bench, on which we tested the performance of the cooling sectors and their thermal contacts. From 2016 the department has designed and launched the realization of a series of prototypes in collaboration with our design office and local specialized companies. Being made of carbon fibre, these prototypes are mechanically very close to the final concept.

Our activity will soon move into the pre-production phase followed by the production of 24 of the 40 Dees that will be installed in CMS. The department will also be involved in the integration of the silicon detectors on the Dees, as well as in the testing of the Dees equipped. For this activity a dedicated clean room, financed by the Labex LIO (Lyon Institute of Origins LabEx), has been built.

The department regularly presents the planning and results of its work at CMS meetings at CERN, as well as at international conferences. 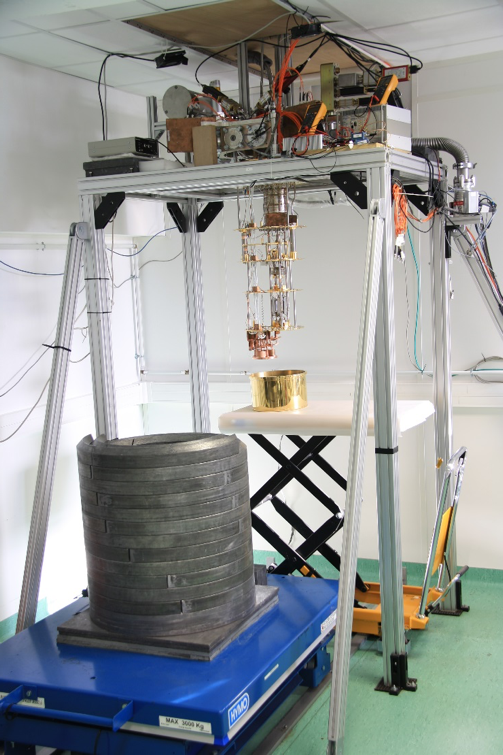 He3/H4 dilution cryostat from the IP2I cryogenics laboratory, funded by the Labex LIO – © A. Juillard

The Instrumentation Department works in close collaboration with the physicists of the MANOIR group on the EDELWEISS and Ricochet projects.

The EDELWEISS experiment is installed at the Modane Underground Laboratory (LSM). Its objective is to detect the Dark Matter present in the galaxy. Ricochet is a nascent experiment that aims to detect signs of new physics by studying the coherent and elastic scattering of neutrinos on atomic nuclei. For these two axes of research, R&D work is being carried out at IP2I on cryogenic ionization-heat detectors.

The department brings its skills in cryogenics, instrumentation, ultra-low noise low temperature electronics and particularly in design and mechanical-electronic-wiring integration. The department is in charge of the technical coordination of the Ricochet project which should be installed at the Institut Laue Langevin (ILL) (58 MW research reactor) in Grenoble at the end of 2022.

BIOCAM is a device that we designed for the DEEPBLUE experiment, which is a remote system dedicated to the observation of marine microorganisms living in the Mediterranean deep sea, at a depth of nearly 2500 m, and in particular their bioluminescence characteristics.

DEEPBLUE consists of two intelligent, programmable and interconnected low-light imagers (color and B&W) providing multi-spectral illumination. It will embark two stereoscopic photonic sensors controlled by an on-board processing system that will provide information on the distance and size of specimens observed in extreme conditions. One of the sensors, an ultra-sensitive black and white CMOS, will make it possible to trigger a bioluminescence observation sequence at thresholds of a few dozen photons. The second Kameleon sensor (Photonis SA) will produce colour images and feed a multi-scale bioluminescence imaging database in the spectral, temporal and spatial dimensions of marine bioluminescence.

The instrumentation department took charge of the choice of materials, using mechanical pressure simulation tools. Titanium was chosen for the tubes and flanges and sapphire, which is very resistant, for the camera lenses. Tested at IFREMER, these lenses can withstand the enormous surrounding pressure of 250 bars, i.e. 250 kg per cm2. A phase of tests at IFREMER in a hyperbaric chamber at 310 bar allowed these tubes to be validated. The cameras are connected to a 100Mb Ethernet link and to a 300V DC power supply from a BJS in the seabed, which also powers other experiments. Using Solidworks, CircuitWorks and EAGLE software, the department designed the sensor head and its optics, the mechanical structures in copper, aluminium and ABS (3D printer), and the flex-rigid kapton. It integrated all the image acquisition electronic cards (PC and Altera) and manufactured the cabling, power supply distribution, slow control, etc… In this confined environment inside the tubes, the thermal evacuation constraints were also taken into account. All the possibilities of remote control of the instrument in order to operate continuously and without maintenance have been taken into account. The assembly and optical test phases were carried out at the IP2I, the final structure and basin test phases will be carried out at the INSU technical division at la Seyne s/mer.

PICMIC is a new concept that tries to exploit both the intrinsic temporal and spatial resolutions of microchannel pebbles (MPC – Microchannel Plate), with which, until now, only temporal resolutions have been well exploited.

The concept is to be applied to a new detector called a nano-channel pebble being developed in collaboration with the Laboratoire d’Ingénierie des Matériaux Polymères (IMP, INSA-Lyon) to achieve both temporal resolutions of a few picoseconds and spatial resolutions of the order of a micron. We propose to improve the spatial resolution using a real scheme that has been developed for RPC (Resistive Plate Chamber) and used successfully. The new scheme exploits the natural granularity of the MCP with a limited number of electronic channels. The principle is simple: the charge is shared between several pixels. The pixels are interconnected in an intelligent way so that the position of a particle impact can be identified. 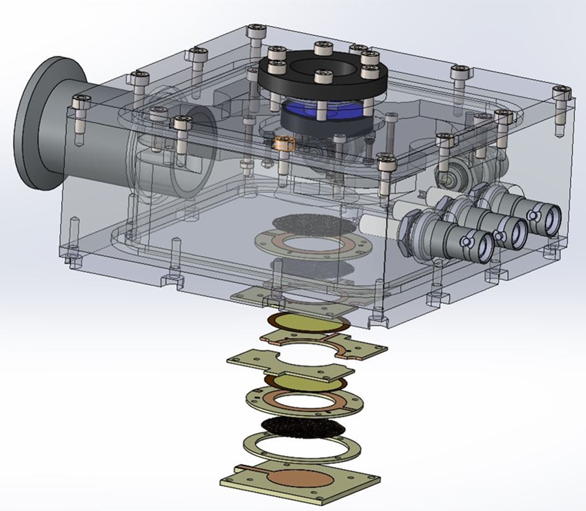 The instrumentation department has taken charge of the design of this assembly for preliminary tests. The two MCP rollers are spaced apart and two separate voltages are applied to them, all in a specially designed small vacuum chamber. Information is collected via two capacitors and a collector (anode). The designed enclosure is made of stainless steel, is watertight and has an insulating POM plastic structure to maintain the stacking of the various printed circuits. Via these printed circuits, each roller receives a voltage differential of around 800 to 1000V via a dividing bridge. Two signals, low level and impedance matched, are thus collected via capacitors; the first MCP stage then the second. Finally, the last signal is collected via a collection (anode). 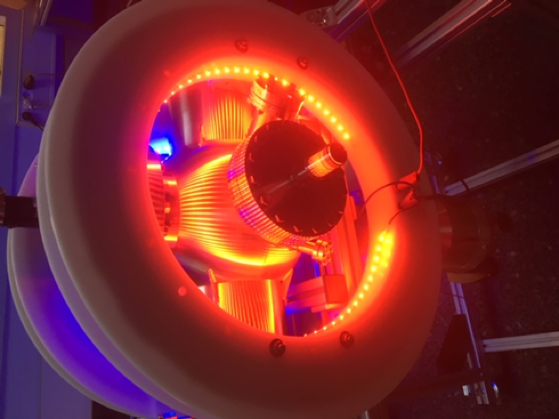 The department is involved in the technical development of the ANR BAMBI (Beta particle Attachment to Molecules of Biological Interest) project, which aims to study the interaction of electrons with pre-excited molecules in vibrational or electronic states. We are contributing to the construction of the new experimental device. In particular, we have carried out the study of the Time of Flight Spectrometry (TOF) device that will allow the detection of fragments of these molecules by collision with electrons. In addition, the department is fully developing the control/command system of the set-up in LabView graphical language, as well as the acquisition system for the real-time analysis which will then be integrated into the general acquisition system.

The Euclid project is a multi-probe observational cosmology satellite selected by the European Space Agency in 2012 for a launch now scheduled for 2022. It is one of the major projects of the European cosmological community today and was designed with the aim of identifying the nature of dark energy and dark matter.

To accomplish its probing mission, the 1.2-m telescope is equipped with two panoramic instruments, VIS – an optical imager – and NISP – both an imager and a slitless spectrograph working in the infrared range.

The fine understanding of the response of IR detectors has been one of the specialties of the IP2I since the initial work within the framework of SNAP/JDEM. Within the framework of Euclid, the IP2I brings its expertise in detector calibration (minimization of common mode noise, development of the predictive model of the frequency distribution of noise, optimization of signal extraction methods) as well as in the modeling of fine remanence effects at the pixel level. IP2I is also involved in the development of algorithms for the correction of fine effects of non-linearity and image persistence that will be used in the calibration and data reduction of the infrared channel of the Euclid telescope. 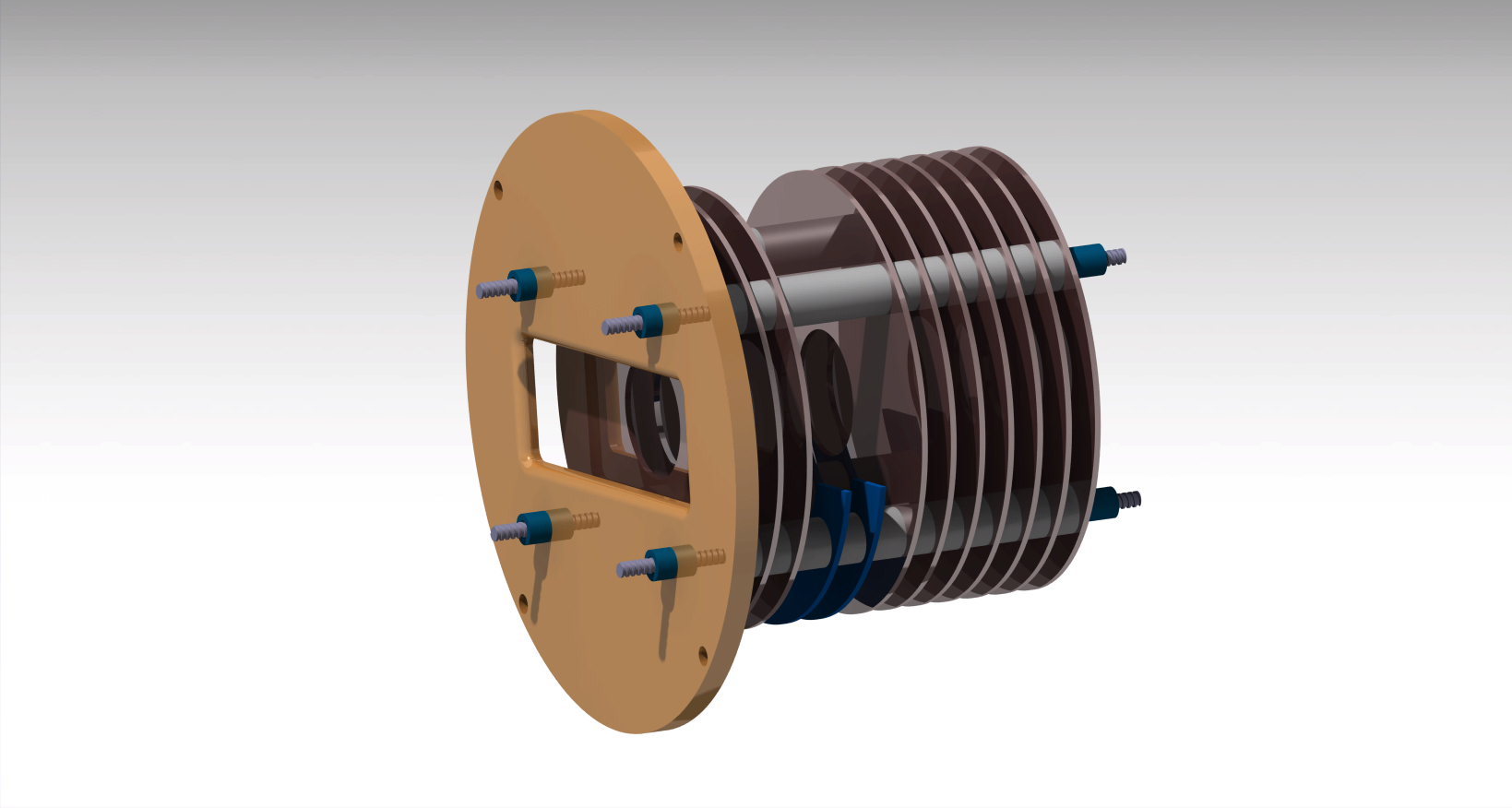 3D view of the ion-optical elements calculated for the new time-of-flight detector – © P.Calabria

Main instrument of the Nanodrops in extreme conditions (Particle-Matter Interaction) team, the Molecular Aggregate Irradiation Device (DIAM) is designed to study the dissociation mechanisms of nano-molecular systems induced by irradiation. The first phase of operation of DIAM was based on the combined use of beams of protonated molecular aggregates and an original coincident time-of-flight device, coupling time-of-flight analysis, imaging and correlated fragment detection (COINToF-VMI).

As part of a new phase of instrument development, in collaboration with the research team responsible for DIAM, the Instrumentation department is participating in the development of ion optics sub-assemblies. In particular, we are involved in the modelling and characterisation stages of the elements with a view to their integration into the device. We design the mechanical elements using mechanical CAD software (CATIA, Freecad) and ion simulation software (SIMION).

Our areas of expertise are as follows: