Particle physics – study of the elementary constituents of matter – is one of IP2I’s main activities. Through the development of a calorimeter for the future linear accelerator, the direct measurement of antihydrogen acceleration due to Earth’s gravitation and the research conducted on the Higgs boson at the LHC, the FLC (CALICE), AEgIS and CMS teams are helping to assemble the puzzle for an understanding of our universe.

The team’s objective is to develop a high granularity hadronic calorimeter to equip future leptonic gas pedals. The calorimeter proposed for the FLC is entitled Semi-Digital Hadronic Calorimeter (SDHCAL). It uses RPC (resistive plate chamber) type gas detectors as active medium, read by integrated electronics with a granularity of 1cm2. The RPCs are inserted in a compact mechanical structure that acts as an absorber.

This type of calorimeter is used to measure the energy of the hadrons produced during collisions in particle gas pedals: on reaching the hadron calorimeter, they will deposit their energy in it by creating a sheaf of particles (called a jet) whose shape and size make it possible to identify it and measure its energy. The high granularity of the detector is therefore essential to increase its performance.

The team, with its partners, has built the first prototype of this new generation of calorimeters, as well as the associated electronics, and has designed Particle Flow Algorithms (PFA) to improve the reconstruction of the jets resulting from the interactions and to precisely measure their energy. Several tests at CERN have demonstrated the great power of SDHCAL.

The team contributed to the realization of the TOMUVOL detector for volcano tomography. It has developed a new reading scheme for large detectors with a reduced number of electronic channels while maintaining high granularity. 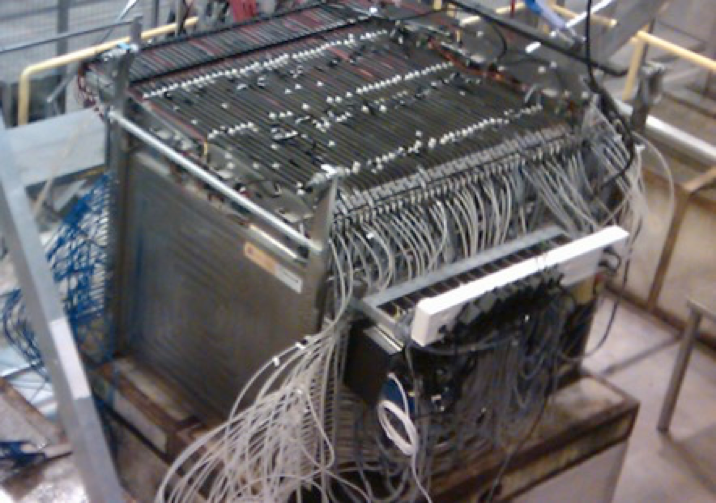 Interaction of a pion (left) and an electron (right) in SDHCAL

The AEgIS (Antihydrogen Experiment: Gravity, Interferometry, Spectroscopy) team at IP2I is working on the experiment of the same name carried out at CERN. The aim is to make the first direct measurement of the effects of gravitation on antimatter by observing the fall of antihydrogen atoms.

Researchers use antiprotons to produce a beam of antihydrogen atoms that is sent into a device called a Moire deflectometer. Combined with a position detector, this allows them to measure the magnitude of the gravitational interaction between matter (Earth) and antimatter (antihydrogen) to an accuracy of 1%.

The AEgIS collaboration brings together physicists from all over Europe and faces many technical challenges such as the use of very low temperatures (0.1° K), ultra-vacuum (10-11 mbar), high magnetic fields (1 and 5 T), Lyman lasers α to characterize antihydrogen jets, the production of excited positronium, antiprotons, etc…