What if the primordial universe was not homogeneous 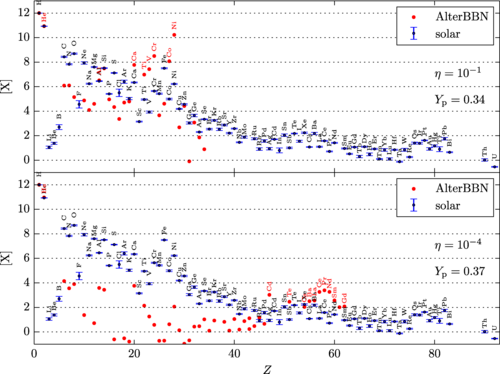 Primordial nucleosynthesis describes the moment when the Primordial Universe has sufficiently cooled down (T ≃ 1011K, t ≃ 1 min) for the protons and neutrons to assemble into complex light nuclei, such as helium and lithium. Analytical and numerical work made possible to predict with great precision what would be the abundances of light elements at the end of nucleosynthesis (t ≃ 20 min). This theory is one of the greatest successes of modern cosmology, since the predicted abundances correspond perfectly to the abundances measured in the most distant objects – and therefore the oldest ones. Only a notable difference remains for lithium, which continues to lead to a lot of research, particularly in the context of new physics.

In its standard version, primordial nucleosynthesis only depends of a single “free” parameter, the fraction of baryons on the density of radiation, noted η. The modification of this fraction leads to a modification of the abundances predicted at the end of nucleosynthesis, because the more there are baryons (protons, neutrons), the more heavy elements – heavier than lithium – are expected to be formed in large quantities. The observations therefore made possible to constrain this fraction to the value η ≃ 6×10 -10 (Planck data).

However, it is possible that the nucleosynthesis was not homogeneous in the primordial universe. Affleck-Dine inflation could lead to local inhomogeneities in the value of η, without changing the overall result on its average value. These inhomogeneities could be so important that entire regions of the primordial universe could have collapsed into so-called primordial black holes, a very active research subject, in particular at IP2I, because they could constitute all or part of the dark matter. In less extreme cases, a sufficiently large fraction of η (η >> 10 -9) locally causes the fusion of heavy elements, which are then present in the stars of the first generations at a time when rather, we expect stars not rich in these elements.

The figure shows the abundances of the elements as a function of their atomic number in the sun (blue curve) and at the end of primordial nucleosynthesis, for a fraction at η = 10 -1 (red curve). We see that heavier elements than lithium, mainly around the peak iron, have been synthesized. At less extreme values ​​of η, these are elements of the “process r” type which are synthesized, with the notable exception of Europium. Thus, the observation of old stars, with low metallicity, but rich in elements of the “r process” type, or other incongruous signatures in the spectra of these stars, could be the sign of an inhomogeneous nucleosynthesis, bringing the light on the inflation of the universe.

This work was carried out thanks to the public nucleosynthesis code paramount AlterBBN, developed at IP2I notably by Alexandre Arbey and Jérémy Auffinger, and in collaboration with Joseph Silk of the IAP at Paris. They were the subject of a “suggestion from the publishers” in the journal Physical Review D (link to article here).