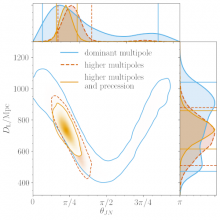 A new scientific discovery has just been released by the LIGO-Virgo collaboration with the participation of scientists from IP2I. Data from the third observation campaign (the O3 run) of the Advanced LIGO and Advanced Virgo detectors reveals that, on August 14, 2019 at 11:10 p.m. Paris time, the three instruments of the network detected a gravitational wave signal, called GW190814. This signal came from the fusion of a couple of enigmatic stars: a binary system composed of a black hole, 23 times more massive than the Sun and a much lighter object, about 2.6 times heavier than the Sun. This collision produced a final black hole of 25 solar masses.

It is the lightest star that makes the GW190814 system so special. It could be either the least massive black hole or the heaviest neutron star ever observed in a binary system. Another peculiarity of GW190814 is the mass ratio between the two stars that compose it. This value, 9, exceeds that of the first detection of a fusion of an asymmetric binary system, GW190412.

The picture represents the distance inferred for the source of GW191412 versus the inclination angle of the binary’s orbit with respect to the line of sight. In general the two quantities are highly correlated but the different masses of the black holes in the binary system allow us to partially disentangle them. The distance is most likely about 700 Mpc, that is 2.3 billions of light years.

An artist’s impression of the GW190814 event was produced, where a lighter compact star is “swallowed” by a black hole 9 times more massive. The flow of material between the two stars and the appearance of the massive black hole are the fruit of the artist’s imagination. As far as we know, the GW190814 merger did not emit light.