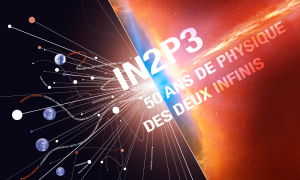 April 14, 1971 Prime Minister Jacques Chaban-Delmas signed a decree “creating a National Institute of Nuclear Physics and Particle Physics”. Its mission was ambitious: “to develop and coordinate research” in these fields. But the projects that drive them are no less ambitious, and there is a great need to provide France with a robust and responsive structure to keep the country at the forefront of research.
This creation is part of a movement that began at the end of the 19th century with work on radioactivity and the atom, and that sped up in the 1930s with the successive discoveries of the neutron, artificial radioactivity and fission, and the study of cosmic rays. The 1950s marked a turning point with the creation of CERN.

In the early 1960s, André Blanc-Lapierre, director of the Orsay linear accelerator, had the idea of creating a “national institute of the Centre National de la Recherche Scientifique” with a strong autonomy. Until the inauguration in 1971, it was necessary to break down many barriers and reticence within the CNRS and outside to get the project accepted by the CEA.

The publication of the decree marked the beginning of a tremendous scientific and human adventure marked by numerous achievements, including the association of the two physics, nuclear and particle, and the fertile convergence of the infinitely small and the infinitely large, in which IN2P3 was a key player.

To mark this anniversary and to launch the celebrations that will take place in all its laboratories, and in particular in Lyon on April 27, 2021, IN2P3 invites you to follow and participate in a special 50th anniversary program

Wednesday, April 14 from 2 to 4 pm live on Twitch
More information on the event: https://50ans.in2p3.fr/livelancement/