How does the Higgs boson interact with itself? 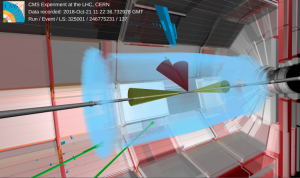 A collision recorded in the CMS experiment in 2018. This collision is consistent with the production of two Higgs particles, with one Higgs boson decaying to two bottom quark jets (red) and the other Higgs boson decaying to two photons (green). This collision is a typical example of the vector-boson-fusion mode of Higgs production, which creates additional jets along the LHC beam (dark yellow cones).

Studying the production of two Higgs bosons is the most obvious way to understand the field responsible for the Higgs boson. A new result by the CMS collaboration gets closer than ever to measuring this field and its physics prediction.

The discovery of the Higgs boson in 2012 by the ATLAS and CMS experiments was both the pinnacle of the scientific results obtained from the LHC at CERN and the starting point for new discoverie. To achieve this, a large community of physicists analyze minutely the data collected by the CMS detector. Thus, by now, reasonably precise measurements of the Higgs coupling to W and Z bosons, top and bottom quarks, tau lepton and muon is likely to be very similar to that proposed by Brout, Englert, and Higgs (BEH) about 50 years ago. However, the form of the BEH potential is in fact a postulate that has never been directly verified experimentally, yet it has a considerable impact on the understanding of the properties of the very early Universe and its future evolution. Using data collected between 2016 and 2018, the CMS collaboration has derived the stringest constraint to date on the value of the main parameter which describes the BEH potential, written λ. This parameter manifests itself as the strength of the self-coupling of the Higgs boson and can be measured through the production of pairs of H bosons.

The collisions examined for di-Higgs boson production consisted of at least a pair of photons and a pair of hadronic jets initiated by b quarks. One Higgs boson can create one of these signatures, so asking for both simultaneously is a good way to search for two independent decays of two Higgs bosons. One example of the improvements that were made to the search was to separate the different production modes of the Higgs boson pairs and and in particular to searchone of these rare collisions where the LHC acts as a boson collider. Accounting for this type of HH production improved the overall sensitivity of the analysis and gives additional information in the coupling between two Higgs bosons and W (or Z) bosons. That coupling is constrained for the first time by the CMS experiment.

These results were obtained by using innovative strategies such as applying multiple machine learning algorithms to identify the photons, the b quark jets and the selection of the signal used to eliminate the overwhelming background from other particles produced at the LHC (background noise when only one Higgs boson was made). The CMS group of the IP2I played an important role in the development of these innovations.

Although a significant statistical uncertainty in the derived conclusion about the data exists, due to the extreme weakness of the HH production process, these results are extremely encouraging to consolidate the nature of the Higgs boson. Thus, the observation and study of di-Higgs production and the Higgs field are among the main topics to study at the HL-LHC, which will start in 2027 and will run until the mid-2030s.