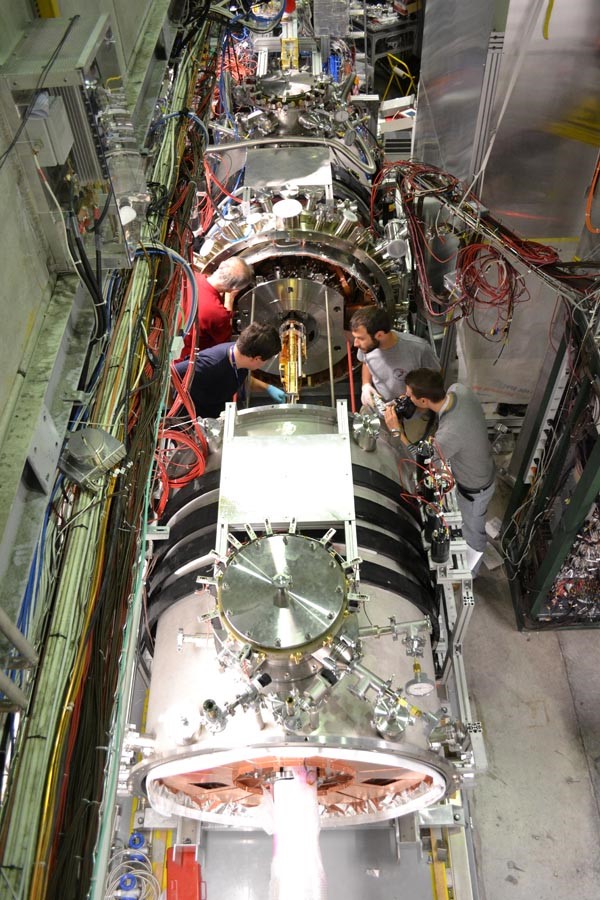 Measuring the gravity of the antimatter (how it weights) is one of today’s challenges, with the aim of testing the fundamental laws of physics. In the AEgIS collaboration, at CERN, physicists have formed antihydrogen atoms in pulsed mode for the first time, with an unprecedented time accuracy of 250 ns. This is a major step towards manipulating these atoms and consequently measuring accurately the acceleration to which antihydrogen is affected by the Earth’s gravity.

Several experimental programs at CERN are planning to study antihydrogen, the simplest neutral form of antimatter: an antihydrogen atom (

) is similar to a hydrogen atom but consists of an antiproton (

) instead of a proton and a positron (

) instead of an electron (

)1. More precisely, it is a question of probing its properties with respect to gravity: does it apply the same way to antimatter as to matter, as the theory of general relativity says? If there is a difference, it is probably tiny (<

atoms, in a pulsed manner, with a determination of the formation time three orders of magnitude more accurate than for previous methods. This is a decisive step in the realization of the atomic beams needed for these studies. This result is published in the journal Communications Physics.

In order to form the antihydrogen atoms, a beam of positrons is sent on a silicon target to first form positronium atoms (atoms formed of a positron and an electron). These atoms are excited by a pulsed laser into Rydberg states, i.e. highly excited states for which the orbits of the electron or positron are very large. Then positroniums can released the positron which can get attached to antiprotons trapped at low temperature by electromagnetic fields, leading to the formation of

atoms. The expertise of the French laboratories was used to analyze and produce the laser excitation of positronium Rydberg atoms, which have the particularity of exhibiting a large Doppler effect. This is the first realization of a pulsed mode of

atoms atoms and the unprecedented precision obtained so far will be use in future experiments for atom manipulation by lasers or pulsed electric fields and time-of-flight measurements.