Participative animation at the Festival Atmosphères

For the 10th edition of the Atmospheres Festival, its godmother Hélène Courtois, astrophysicist and cosmographer of the IP2I proposed an innovative participative animation.

On October 10, during the Festival Atmosphères, Hélène Courtois, surrounded by renowned researchers, participated in an anti-conference “No plan B, a universe, a planet, an ecosystem, researchers”. This took the form of a question-and-answer exchange with the public on the theme “our place with the living, the planet, the universe”. The architecture of the Universe was one of the subjects discussed.

The conference is available here.

For 10 years, the Festival Atmospheres, created by the director Pascal Signolet, has been inviting to question the world and find solutions for our planet, alongside scientists, filmmakers, artists, citizens and committed associations. Labeled Fête de la Science, the festival’s DNA is to facilitate the thinkers and pioneers who inspire them. On the program: films, debates and conferences, shows, … 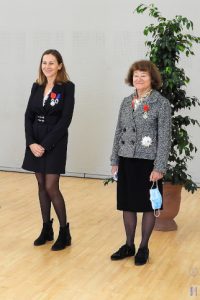