The most massive neutron star is larger than expected 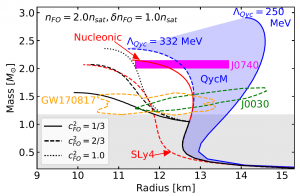 The NICER telescope installed on the ISS scans the core of neutron stars, and brings a lot of information on their nature. The latest announcement is that the most massive star known, PSR J0740+6620, is larger than many models predicted; about 25 kilometers in diameter. To measure their radius, physicists can use two methods: by deduction from the rotation speed of the star; or by exploiting the curvature of space-time which depends on the overall properties of the star, including its mass and radius.

Knowing the radius of stars is essential to know their nature and thus compare them to models developed by theoriticians. Scientists are not able today to know precisely these interactions, and propose models to describe the core of neutron stars. Confronting the predictions of these interaction models, which give the properties of the star, with the observations allows to validate or not and thus to select the most relevant ones. Jérôme Margueron, CNRS research director at the Institut de Physique des deux Infinis in Lyon, explains the importance of these measurements for theoretical physics. “Many models predict a reduction in the radius of the star as its mass increases, with new particles that contribute to smoothing the equation of state. For example, many models adding hyperons, a type of particle composed of so-called ‘strange’ quarks, are in this case, and thus disagree with observation. One of the models that could survive is the quarkyonic model, developed by Larry McLerran and Sanjay Reddy from the University of Whashington (Seattle), which may provide the key for the analysis and on which I worked with my phd student Rahul Somasundaram to integrate it with neutron stars, says the physicist. It is a model that describes quarks and nucleons as two representations of the same ancient object, in opposition to the traditional description of phase transitions, which considers particles of different nature. And his predictions are compatible with the observations on J0740.

With the publications on J0030 and now these results on J0740, Nicer and its accompanying analysis methods show their status as an indispensable instrument for the study of neutron stars and complementary to the gravitational wave interferometers. The already planned study of other pulsars, with masses different from the first two, will further refine the knowledge about them and the theories around the strong interaction, which are at the heart of modern physics.